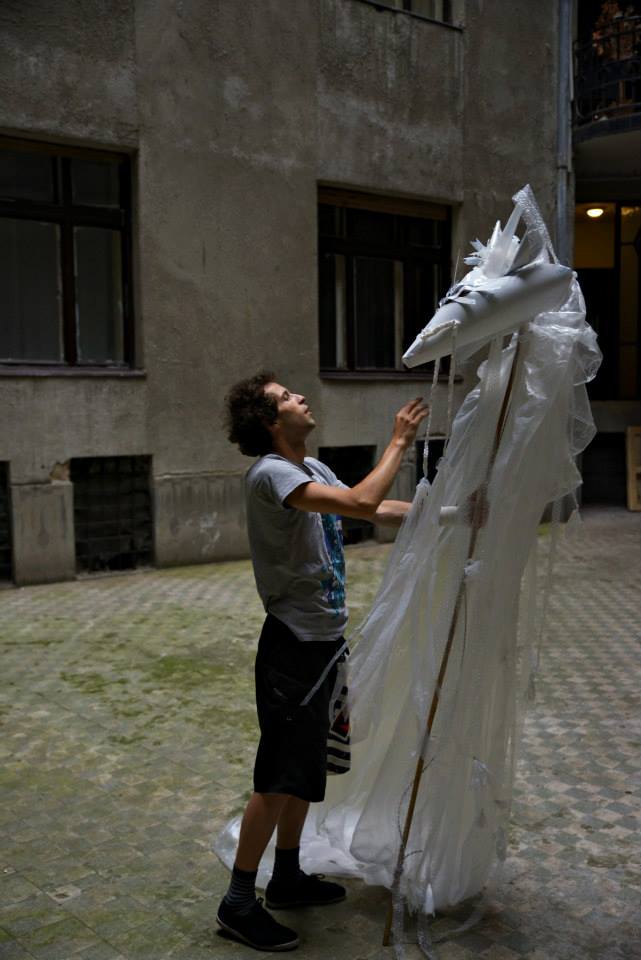 The residency of Hungarian artist Kovacs Tamas took place at Czech NGO Sunshine Cabaret in Volyne and Strakonice, Czech Republic in March 2017. The main topic of the residency was the preparation process of “Orfeusz”, and the creation of the scenography for the performance. For this aim we have been experimented with various light sources and designed a body-like tent that can be attached to a car or can stand by its own.

The main working place was SunCab‘s workshop in Strakonice where we have met on a daily bases and conducted the experiments and knowledge exchange. Each day was partly lead by Tamás Kovács (HU) on puppet and object manipulation techniques, partly shared by Kateřina Hadravova (CZ) and Martin Vadlejch (CZ) on the possibilities of stage design and the technical implementation of puppetry and scenographical ideas. Jono Heyes (NZ) joined us from time to time on musical improvisation sessions and discussions concerning dramaturgy issues, while René Vitvar (CZ) as a great actor and storyteller was invited to support the field research for Orfeusz.

The idea of the workshops was

1) To use an object (or puppet) as a dead, non-living material, and research the journey through which it comes to life, find new ways for manipulation by light sources.

2) To find a way to impersonalize the human body, and use it only as shape.

3) To use the topic of the myth of Orpheus and Euridice as the metaphor for the in-between, the transition space between life and death, light and darkness, male and female, up and down, inner and outer space etc.

4) Experiment with light and objects to manipulate the visual effect of light, and research the impact and different atmospheres of light sources like the overhead and still projectors, lightboxes with different quality of light bulbs, led, chip-led, halogen and tungsten bulbs, and live fire, oil and wax based candles and lanterns. Shadowing these light sources brought up ideas to design surfaces that act like solid or airy „space“. Transparency with the usage of different type of nets, semi-transparent materials, ready-made objects, and natural articulations helped the process to find visual images for scenography and visual images for puppets.

5) The concept of tensegrity brought in the creative process by Tamás inspired us to design a tent for the performance that embodies a puppet like object and at the same time give the impression of a living body.

Besides the workshop time, the residency period was spent also to discover local stories, relationships to the land, local art, and the tradition of puppetry.

1) We have visited the puppet exhibition in Strakonice organized around the anniversary of Czech puppeteer Josef Skupa.

2) We have visited Sladovna in Pisek, and introduced Tamás to one of the producers, Adam Langer. During the visit Tamás received an invitation to organize a small workshop of puppet making for children which was part of the event called Makers Day. Furthermore, they agreed on future collaboration, and the presentation of Orfeusz.

3) René Vitvar (CZ) came for two days to help us get closer to local stories and support this research with translation as well. Rene works as an actor, puppeteer, and mostly appears in street performances. The team made a visit to two pubs – Kavarna in Volyne, which is an urban style culture cafe for young people, and Hospoda in Zalesi, which is a very traditional small village pub for locals, the only one in the village. At both venues, our aim was to collect stories on love, death, find the moments of transition in everyday life, or extraordinary stories of ghosts.

The collaboration with Tamás on the project Orfeusz brought us an invitation to Pécs (HU) between the 19th and 26th of April. We could try out the newly designed tent on a central square in the city and perform for 4 days with an earlier performance called the Collector. The tent needed a few changes that we could manage to do in Hungary before leaving, so the stage for Orfeusz is now in perfect condition to travel and be used in different weather conditions.

Suncab’s role during this residency was fulfilled by creating the stage design for Orfeusz and support the artist in various technical needs, while we have received a lot of inspiration and got to know new people from Hungary to collaborate with. During the festival, as we have arrived with one of our maringotka caravans, we were able to introduce this traditional gypsy caravan to the public in a modern functional way. We have received many enquiries concerning the design and making of the caravan and have met potential new customers.

For us it has been a great pleasure to travel to Hungary and spread our fascination with caravan designs, just as introduce our profile of mobile stage designs.

Our collaboration with the fresh foundation Tamás has set up is ongoing, and we have been in touch since the beginning of this year. Our plan is to travel with all developed and future performances in the region and share with local, mainly small communities the repertoire we have been working on, with this offering also performances and workshops for various events and age groups.